Two short weeks ago I challenged myself to complete one project a week for the next seven weeks.  I’ll be honest, I already kind of failed, but I figure if I have seven projects done at the end I’ll be proud of myself.  I made the rules after all right?

I say “kind of” failed, because my week one project took about one and a half weeks as it was a bit more complex than I had planned for.  If you’ve seen my Instagram, you know that a few weeks ago the two lap belts I ordered finally arrived and I was excited to get them onto a project.

I decided to kill two birds with one stone and make my week 1 project completing the lap belt backpack I decided to use the blue buckle on.  This was a fun and challenging project, because I had no pattern I was using for the project, just a collection of pictures from Pinterest I wanted to combine and make my own. Usually, I would take these pictures and make a detailed sketch of what I wanted my result to look like…

This time around I must have fell and bumped my head, because I never competed a full sketch of the project!  Instead I just started from what I knew how to make and strove to make it look as much like my main inspiration picture as possible.  It either says something about my reverse engineering skills or my sheer luck that the backpack tuned out as well as it did, but that’s a discussion for later. 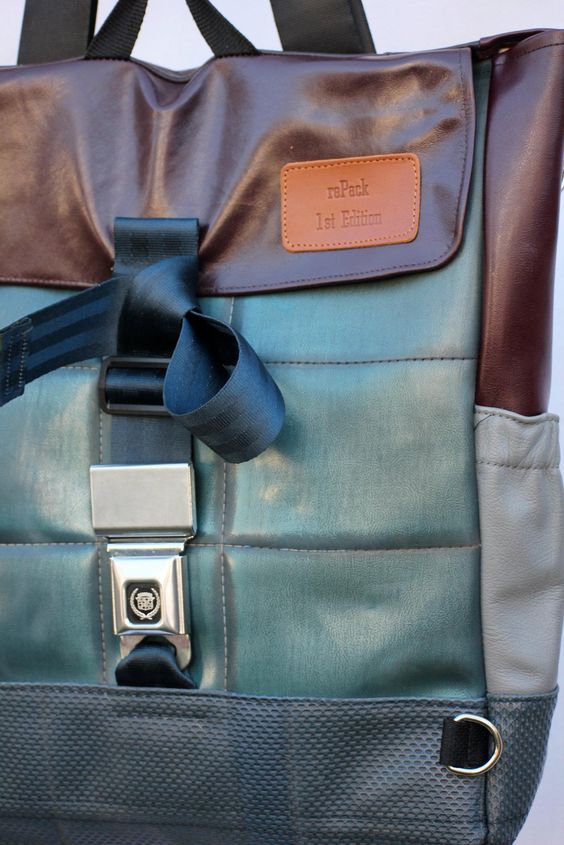 Looking at flap backpacks on Pinterest I figured that a flap backpack or drawstring backpack are in general nothing more than a tote bag with flaps and/or drawstrings added.  Luckily, I have making square bottom tote bags down to a science.  All I had to do was measure another backpack I had that I liked the size of and add some extra L X W for the seam allowance.

I decided I wanted the bottom of the bag cut on a fold so that the base would all be one piece and the sides would need to be stitched up.  Next, I added the accent leather (pleather?) fabric on top of the main upholstery weight leopard print fabric.  I debated putting an outside pocket on the back of the backpack, but in the end decided to leave that for the bags next improved iteration.

Embarrassingly, I accidentally stitched all the accent fabric on before adding the bottom half of the lap belt and had to remove some of the stitching, so I could slip in the lap belt.  It was no big deal but felt like a rookie mistake.

It was at this point that I took a break to think out the design more before I made a mistake that would be hard to fix.  Since I didn’t have a detailed sketch I spent a lot of time mentally working out the different options for reaching my end result.  I asked myself questions like: When should I add the flap, should the top half of the buckle go on top or underneath the flap, how do I keep the heavyweight Pellon interfacing in place at the base of the bag?Although these were important questions to ask myself, I think they were also mixed in with a good amount of procrastination.  In the end, I inserted the bag lining with an added pocket (see the cute bee print fabric) and then added the flap.  I decided on splitting the top portion of the buckle into two pieces.  I left the adjustable strap out and the part attached to the buckle was sewn onto the end of the flap.  I also used some of the leftover belt to make a grab handle on the top of the backpack.

The most stressful part of making any bag is always inserting the lining for me.  I’ve tried all the methods, but somehow, I always seem to misjudge the lining and must adjust. *Facepalm* The thickness of all the layers is also a stressor for me and with this bag it was especially stressful.  With my upholstery weight fabric, lining fabric, two-layered flap and two-layers of belt buckle I had my machine put to the test!

Ruby did remarkably well given all I (literally) put her through.  Honestly, all the needles I broke on this project are entirely on me.  I learned a whole lot about the right mix of speed, needle type and stitch length making this backpack.

Anyways, sorry there aren’t more pictures of the process!  I’ll do better next time.  I think with my lack of planning and extemporaneous sewing (is that a real phrase?) I was afraid the process would be especially ugly; I wasn’t wrong, but I’m sure now that would have only made it that much better to share with my readers.  Embrace the process and all that.

In the end, I ended up with a beautiful, heavier than standard backpack, that’s great for carrying the essentials and a light laptop or tablet.  Let me know what you think in the comments.  I’m already preparing a list of what I’d do better for next time.  See you in a bit, when I reveal how Week 2’s project went.

You ever feel like you have too much fabric?  If you’re a sewist, that’s very much a rhetorical question.  What’s the fun of having a hobby if you’re not doing the absolute most and living your best life?  Plus, you never know when you might need two yards of that green and white gingham print knit!

Anyways, my excessive stash is what’s led me to my decision to challenge myself.  The holiday season is coming up too, so I figure this is the perfect time to give sewing from my harvest a chance.  Each week leading up to Christmas I am going to complete one sewing project a week, using only fabric from my plentiful stash.

Now at this point you may be reading this blog and thinking, “This sounds like a fun challenge!  But can she do it?!?”  Honestly, I’m asking myself the same, but really looking forward to the fun that is to be had.  I can finally get around to making those bags and things I keep meaning to make for myself, plus I can make some interesting handmade Christmas gifts!

The other result of this I’m looking forward to with this is curbing my shopping addiction.  I love to shop for bags and I love to go to Joanns.  If you follow along on my Instagram (@sewstrawberrysweet), you’ll know that my recent move means I am now within walking distance of a JoAnn Fabrics.  So close in fact, that the other day I realized I still have a bit of a WiFi signal from my apartment!  The temptation is high to be at JoAnn’s every second of the day.  Working from my stash will give me chance to use all the fabric that I bought without a purpose in mind.

I have also been feeling like I’ve hit a low motivation point in my sewing journey lately.  I was going really strong there for awhile, even amid moving cross country to the South.  I think focusing on some new projects should help give a jump start to my motivation!

I’m sure by this point, you’re wondering just what I’ll be sewing; that’s where I need your help.  Starting this Monday, I will be posting pictures on my Instagram of my fabric along with project options and asking for your help in deciding what projects would be best.  Think you’re up to the task?  I sure hope so.  I can’t do it without you!

I’ll leave my Next to Sew Pinterest board below ,that I have been adding to for just about the last billion years.  Let me know in the comments what projects you want to see come to life with my own personal flare.  Or even better, let me know if you’re in for the challenge!  Just use the hashtag: #SSS7in7challenge

It’s funny referring to him as that: my best friend. He’d never say the same about me, but not in a it’s one-sided way, more like, it’s just not the way his generation would refer to their kids kind of way.

As I worked on building my sewing/craft desk, I realized how I wouldn’t have been able to do any of what I was doing without my dad teaching me how. I think I was only like eight when he taught me how to change drill bits in a power drill. He’s also the reason I remember “righty tighty and lefty loosey” when I’m trying to remember which way to turn a screw.

My dad is also the same man, who, when I was about ten, promised he could fix my sewing machine when it broke. I didn’t believe him. I was thinking, “You’re a boy. Boys don’t sew.” However, my dad, with his distinctive deep voice, told me, “Sarah, I’m a machinist! I can fix anything.” And wouldn’t you know it, he did! He fixed my sewing machine.

He’s also the same man, who every Mother’s Day would say, “In order to be a father, you have to be able to mother a little bit.” Maybe he was half kidding, but the way he approached things… The way he taught me and my brothers, he showed the truth in that funny saying.

If he can plant beautiful flowers around the yard AND lay the bricks that surround them. Then I can sew something amazing AND build the desk my sewing machine sits on. I learned I don’t have to fit into someone else’s box; I can build my own.

Don’t let anyone tell you what you can or cannot do. Or define what being a woman, a man, a daughter, a son, a human looks like. You do you. I’d wager you’re the only one that can.

I’ll tell you like my dads told me time and time again (he has the tendency to tell the same stories over and over, luckily they’re all good), you can do anything, it’s just time that’s the barrier, that’s limited. So budget your time and achieve something great; whatever great means to you.